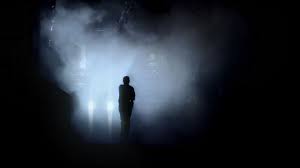 We froze. Eyes opened further and a dark figure was seen moving towards us. "Should we run?" - I murmured. No response. Meanwhile the figure continued to walk towards us at a brisk pace. We stood there as if under a spell. The figure just moved ahead as if it had not noticed us. As it neared, Gopal turned to give way. We followed him with six eyes staring at the lone figure. It came and went away with none of its features distinguishable.

A collective sigh went out once it was no longer visible to us. "He must be a villager" - Gopal said once he left. We were again left alone with our thoughts and tobacco fields. We moved ahead with a little more confidence now. The passing of figure had given some courage to our spirits and our pace increased albeit slightly.

"Why would a villager walk through these fields at this point of time?”, asked Ravi.

"I think the same question can be asked of us”, Gopal quipped. A nervous laughter followed. This was the first time we all smiled after embarking the journey and now it felt that it was a matter of time before we would reach college and discharge some of our precious bodily fluid at principal's desk.

My mind had quietened now and was focussed on getting ahead. Ravi too had relaxed as he started bitching about Maacha. "He was a fool not to come with us. He is the only son and he was pampered a lot by his parents. He can't even go to a bookstore to buy a pen for himself. He needs escort all the time”, said Ravi. Changing the topic, I asked Ravi - "Do you know why the banyan tree is considered to be haunted?"

"Do you really want to know?"

"Yes, tell Ravi. I like a good story.I am getting bored with the silence", said Gopal. Ravi then regaled the story.