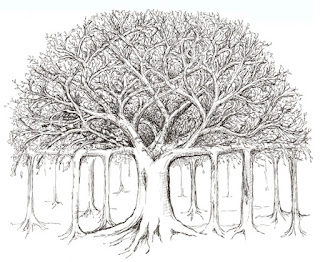 Ravi started - "The story of this tree had gone back a few centuries ago.  It was said during that time, there was no roots on the tree and the tree was supposedly young at that time. A banyan tree does not become sacred until it has grown its traditional roots. Even traders after which it is named, do not prefer the shade of a young banyan tree. However, it was a perfect place for young lovers aged 9 and 10. Love had bloomed underneath the loneliness of the banyan tree. It had bloomed even before the concept of love before marriage existed. This was a sacrilege to the family when the word went out of this childhood romance. The family was shamed publicly and the girl was called an whore by th ewomen of the village. Unable to bear the shame, the father took the girl to the center of the village and beat her with the flail. Whole of the village watched and heard the screams of the girl. In a shameful rage, the beatings grew harder and the screams louder until a long silence ensued. The villagers left one by one after the spectacle. Only her mother remained who was taken away by her father letting the body of a girl rot in the searing sun.

During the night, the boy whom the girl loved so dearly came to her and saw her body. Tears rolled down his eyes. In an inexplicable moment, he pulled out saw blade and cut a chunk of hair, which he admired so much. He walked to their beloved bnayan tree and buried the chunk of hair underneath the banyan tree. The next day, nobobdy noticed the missing hair and were more concerned about burning the body and it was done with swiftness to let normalcy return to the village. However, as the village returned after burning the body, they saw the banyan tree's trunk age like it has been there for centuries. Instead of the roots, it is said that the hairs of the girl grew from it. The next day all the village leaders and women involved in shaming the girl were found dead with a chunk of hair on their lips."

The remaining villagers terrified deserted the village except for the boy who loved. He remained under the tree and hid from his family when they came searching for him. It is said that the boy lived under his death at 100 under the tree, regaling travelers of their love and the story of the roots. The roots however, no longer looked like hairs but they never reached the ground. They just remained hanging there. It was also said one night every month during a full moon, the roots again turn back into hairs and the girl would visit the boy until his death. However, after his death, she comes searching for him and leave a strand of hair who is found underneath the tree

Gopal looked up and said slowly - "Today we have full moon".

"Things are looking up for us. At this rate, we are about to be the proud recipients of the chunk of hair" - I said.

"Don't worry, man - we are three of us and this is just a story" - Gopal responded.

In midst of this inspirational conversation, we missed the haunted tree becoming visible over the distance. The banyan tree with its hanging roots looked ominous as we came closer to it. Our pace reduced to baby steps as the banyan tree grew larger in our eyes. The wind still swayed rest of the fields. Rustling of the leaves reached our ears as well as the beating of our hearts. Ravi had gone mute and Gopal started checking the height of the barbed wire again. My mind was now noting the observations that Gopal was making as that was our only hope at this stage. Running back was no longer an option as we have already come too deep to escape with our legs.

As we went ahead, the hanging roots became larger. The nearer we got the rustling and heartbeats only got lot louder.