Image Source
Finally after a long time of no-activity I have been able to pen down a post albeit with the help of an anonymous old man who was last seen trying to catch an auto-rickshaw. :)
All autos whizzed past me but none stopped as every auto had a passenger. The time’s 9.15 AM. It is the peak time for the office-goers. I used to be like them not so long ago. I myself started my office-days playing catch-up with the elusive bus that helped me reach my office on time. But if I missed that, which happened quite often, did mean an earful in the morning from my not-so benevolent boss.
Anyways as my income increased I graduated to the auto-rickshaws which is a unique breed compared to all other modes of transport. The 2-stroke engine 3 wheeler has a tendency to roll over the moment it encounters any change in centre of gravity and thus it is a little dangerous if you have the weight to alter its centre of gravity. Yet remarkably this vehicle can wriggle out from the tightest corner like a cockroach with consummate ease. Yes I call the ubiquitous 3-wheeler the cockroaches of the road. They just come out and go in out of nowhere and if you are in them, you never know the route the driver is going to take. These days they also smell like cockroaches with toxic petrol and kerosene mix fumes coming out. I don’t blame the cockroach-roadie. The government has given them incentive to do that with differential pricing on all petroleum products. However, unlike the silent cockroaches, the cockroach roadie can spew out great invectives if by chance you block their progress. The best part is when at the end of ride you are mentally and physically exhausted they ensure you get financially exhausted too. But can’t really blame them. The system mandates them to be like that, else they get slaughtered like a pig. ( No pigs were harmed when writing this ) 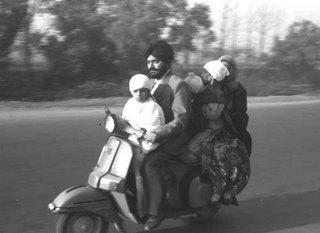 As time passed I moved to my “Hamara Bajaj” two-wheeler; the largest selling two-wheeler of the country. As the slogan went, it was a family vehicle equally loved by my wife and children. But my children have grown and they prefer the fast cars and motorbikes to “Hamara Bajaj”. So now my “Hamara Bajaj” sits in the corner of my household gathering rust and living a retired life just like myself. But hats-off to it for giving our family some of the best moments of our life.

(Image Source)
Now in the retired life I prefer walking rather than navigate the cows, potholes, the fancy cars and bikes. However I have to take my pension from the same place where I worked for so long and they have asked me to come sharp at 9.30. Wonder when India started working on time!!Ah, yes an empty cockroach has arrived and here I go reliving the journey of my younger days...
at 1:35 AM 3 comments Links to this post
Email ThisBlogThis!Share to TwitterShare to FacebookShare to Pinterest
Labels: auto-rickshaw, guest~blog, hamara~bajaj, old-man, rant
Newer Posts Older Posts Home
Subscribe to: Posts (Atom)