After an old  man and a word, now we have the mouse from the cubicle as the next guest blogger. It has been showing up more than what it used to. So on inquiring about the increased visitations, it said it was sad. As the blog is generally bereft of new posts I gave him the opportunity to write his heart out here!

Hi There!
I live close to those lonely souls called wires. Poor things communicate daily people's conversation but have themselves no one to talk to except me. So I get to hear the entire official grapevine. I know all the mother-in-law issues, wife issues, the location of night-outs, boyfriend/girlfriend issues,  courtesy these wires. Don't ask me details now. There will be time for details but not in this post. So from this source I got to know about blogging. The author of this post generally likes to post from office and we get the sneak-preview before it gets published. Anyways it never is that interesting, but being privy to information in information age is to be powerful. I wanted to start a blog but guess this blog is anyway unused so I might well use it more often. So that is the background story.


Now, I like to give my introduction. I am part of the author's team unknown to most team members. I have been there before there was any team in the first place. In the official counting, I am never included as I never fill time-sheets. I don't believe in filling my time for a duty which I consider my birth-right. More on this birth-right will come later in the email. The rest on me you will come to know from my planned series of emails.

Now, I will talk about my smaller friend who died an untimely death in the bin of the person whom I used to hate and left me alone in this world. Yes I still have my wire friends but as the jingle go Har Friend Zaroori Hota Hai. I hated my friend's executioner much before that and from all the overheard conversations the author here also does not like him. He is after all author's manager. This manager flicks all the chocolates, biscuits and whatever eatable before I could even smell it. The dust-like crumbs left after this manager had his fill were the only proofs of the presence of those delicious foods. Yet he was just the person whom I hated before his bin claimed my friend's life. But now he is my enemy and I will extract my revenge in good time and in kind.

Now about birth-right I was talking about. We clean-up the dirt of the society. Very few people of your kind ever understand the importance of this duty. We are what the classifiers call the scavengers.  Without us, those big crumbs will rot and spread diseases. My friend was doing this duty to society. Yet the same society never understands this. But the good part is the satisfaction that he died a death in the line of duty as a martyr. He did not die by running away and getting beaten to death or by getting trapped. He died in the line of duty of eating away the food in the bin. Moreover, before dying he had his share of limelight.

He was spotted first doing his duty in author's bin. Seeing the awe and excitement that came with his sighting, my proud friend's heart swelled and probably must have heard victory drums being played in the background. Under this spell, he bravely and slowly like a man in control with his surroundings, moved from one bin to my enemy's bin with a single graceful leap that would have done any ballad dancer proud. Unfortunately that was the last leap he ever made. For as he was doing his duty, the mouth of the bin closed and he was thrown into Malad creek, never to be seen again.  Please observe a minute of silence to pray for his soul. On this sad note, I take your leave. But I will be back and the next time with some juicy office gossip. Till then Adios!

Yours Friendly,
The Cubicle Mouse

at 2:00 AM 0 comments Links to this post
Email ThisBlogThis!Share to TwitterShare to FacebookShare to Pinterest
Labels: bakwaas, cubicle~mouse, guest~blog, mouse, rant, sad~rant, time-pass 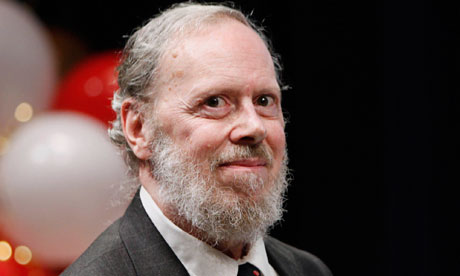 Wanted to give tribute in the words he created! It is simply amazing that all the javas, .NET, perl, python, etc share their origins to C. It is something like the first vertebrate within the animal kingdom, if my  biology serves me right.
For all the non-geeks - To understand the post please go to this link which I have used as a reference to get my facts straight.
PS: btw the above code compiles without warning and errors. :)
at 5:08 AM 10 comments Links to this post
Email ThisBlogThis!Share to TwitterShare to FacebookShare to Pinterest
Labels: C, coding, Dennis Ritchie, obituary, programming
Newer Posts Older Posts Home
Subscribe to: Posts (Atom)