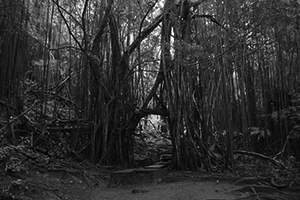 We inched closer at 20 feet away from the tree we stopped. Gopal - "Do we want to take this risk?" "
Yes, let's abort. This is not worth it. We can create story from here as well", I said hoping to turn back and walk as fast as we can. But Ravi said, "We are close to principal's office and now we cannot turn back. Let's do this." Gopal agreed and I had no choice but to go ahead with them as walking back alone is just as dangerous as going forward with these guys.

Time seemed to stop still. We were now right beside the tree and were moving quickly crossing the tree with our heads down. A voice called out - "What are you doing?" in a coarse thick accented voice. We froze as the sound pierced the silence of the heartbeats and the rustle of the leaves. We looked at each other as none of us were sure.

In the distance we saw a lone hunched figure. Nothing else could be figured out in the moonlight. The sound again bellowed - "What are you doing?"
"Guess he is must be one of the farmers" - Ravi said. Gopal replied back to the figure pointing to me- "We are going to the college ahead to look for a book this guy lost"
Moving closer we could say he was dressed in traditional farmer's attire.

"Why at this time of the night?" - He asked.
Gopal again replied - "He wants to read today as he has to answer questions from it."
"I thought we were going there to piss on principal's desk" - I muttered.
"What? What did he say?"
"Nothing he just said it was mighty important to him to answer the questions and thus the book" - Gopal replied looking at me with contempt.
"Do you know you are not allowed here at this point of time?" he bellowed again.
"No, we didn't know. Why?" Gopal replied.
"Gopal - This is not your graphics lecturer that you are asking questions to impress him" - I muttered again.
"It's a long story and I don't have time for it. But since you are here, I have something to give you boys", he replied.
"What is it?" - Our only brave spokesman asked.
"You are the curious one. Come closer I will show you."
Ravi lips moved after what seemed an eternity - "No Gopal."
"What is it?" - He again asked.
"Come closer." saying, he opened his palm showing the gift.
Gopal started moving towards him and we followed.
"Yes closer, please".

We strained our necks to decipher the item as we went closer. We were within 5 feet of him when I got a glimpse of what he was holding. Before I could react Ravi let out a scream and he started running.  I looked again and Gopal was already running away from both the guy. Then Ravi called again - "Run" and that was only I heard before I saw all three of us running towards the college. We heard two other screams - "Come here, motherf***ers!" from the guy and one loud wail drowning all other noises.

None of us looked back and we ran. We saw the lights from the campus but we kept on running towards not daring to look back until we were under the bright lights of college campus. Looking back, we did not see anyone or anything following. Relieved, we slumped on the damp grass but still shivering.

"You have glasses and yet you couldn't see.  I could make out it was the bunch of hair and you were the chosen one and with you we would have also got the hair and before I could respond he screamed" pointing towards Ravi.

"What happened, Ravi? Your scream saved us." - Gopal questioned Ravi.
Ravi was still shivering when he said - "I saw the girl right above Gopal."
"Let's go back through the main road" - I said and got up to walk.
Gopal replied - "But before that let's at least do what we came for."
"Are you serious? After all this we went through, you want to pee at Principal's desk!" - Ravi exclaimed.
"You only gave the idea. Let's do it" But I disagreed.
We looked at each other for a moment and then it happened in all its glory.


One after the other, Gopal, me and finally shivering Ravi peed at the door of the principal's office.

PS: That's the end of this series. This was my first attempt at writing a story. Please let me know through your comments your thoughts on this. All the links are given below:
at 2:08 PM
Email ThisBlogThis!Share to TwitterShare to FacebookShare to Pinterest
Labels: bet, chapter-5, college-days, short story, story, unsafe-bet