Quirks of Life starting with T is Towel.  This is part of April A-Z challenge details of which is present here.

It was Douglas Adams who identified my true talents and made me famous across the world. 25th of May is also being celebrated as a Towel Day.The immortal words can be found here. So what does an humble towel has that much more celebrated items that man has invented does not have.  Well apart from the obvious and words dedicated by Doug, I do come in picture during many of the marital tiffs. An example is given below: 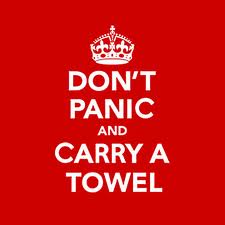 First Year of Marriage
He has left his wet towel on the bed. Guys will be guys! Everything has to be taught to them. Without me, how can he live? So sweet!

Second Year of Marriage
He forgot his wet towel on bed. He needs to be more serious in marriage and take more responsibility to live a meaningful life.

Third Year of Marriage
This is twice in two months that he has left his wet towel on the bed. We are going to have kids and he is still behaving like one. When will he learn?

Fourth Year of Marriage
There is this baby screaming. I have to do all these chores and above everything else he still has left his wet towel on the bed. He is treating me like a maid.

Fifth Year of Marriage
Four times in last two weeks. Can't you do one little thing right? How many times have I told you not to leave the wet towel on the bed like that? Kids are growing but an old man is turning into a kid.

Sixth Year of Marriage
This is it. You keep on treating me like a maid and I am done with this marriage. I will take my kids and go. Then you will remember not putting the wet towel on the bed.

Seventh Year of Marriage
Wet Towel on the bed and an empty house!

So thats done with the example and now leave you to ponder about my existence!

PS:I wanted to write something absolutely pointless. Not that the other were not pointless  but I wanted to climb the peak of pointlessness! Moreover, I wanted it to be aligned it to the theme - Quirks of Life. Somehow, felt the towel fit the bill perfectly.